The first section of track on the historic North Auckland Line (NAL) was opened in 1868 and the line was finally completed in full in 1925. NAL begins at Westfield in Auckland and runs for over 280km before terminating at Otiria in Northland.

With many NAL assets nearing their ‘end of life’ and requiring replacement and with line speeds restricted to 25kph in places, investment was secured to ensure the line remains open, lift track speeds and to allow the NAL to accommodate modern locomotives carrying larger, 9ft shipping containers. In order to achieve this, a spatial assessment of 13 tunnels and 6 bridges was required to determine their clearances and structural integrity.

Vitruvius, a multi-disciplinary consultancy specialising in survey and engineering, were engaged to survey all 13 tunnels and 6 bridges, ranging from 250m up to over 600m in length and work with consultant designers to accurately determine the extent of track lowering required. In the case of some tunnels, structural support treatments were also assessed to support the lowering of tracks.

This project came with a number of challenges not least the 245km of track to be surveyed some of which was in remote locations, but also a tight time line of 4 weeks and the track  to remain operational.

Lead Surveyor, Stuart Tosney and the Vitruvius team chose to use the highly efficient Leica P40 laser scanner to capture the data quickly, safely and accurately and negate the need for costly return site visits.

Using a combination of conventional survey methods including the Leica TS16 total stations and GS18T GNSS, as well as the P40 laser scanner, the team measured full ground surface topography extending 500m from each tunnel portal and bridge. This allowed an accurate Digital Terrain Model (DTM) to be created of each site, all of which was fully coordinated and controlled from the established survey control network that was installed through a combination of Static GNSS and total station observations.

As the rail line was active during the survey works, a tripod mounted Leica P40 laser scanner was the safest and most efficient methodology for surveying the tunnels. Due to the safety implications of walking along the bridges (without handrails), the scanner was utilised in order to eliminate the risk of the team having to be on the bridge to survey it.

The Leica P40 Scanstation was used to capture highly accurate point cloud data of the bridges, tunnel interiors, portals, and the rails themselves. Having collected all the necessary data, it was then imported into Leica Cyclone software for processing and registration so that the individual scans could be ‘stitched’ together into a single point cloud and fully referenced to the survey control.

From this, each tunnel and bridge had the rails and other topographical features extracted from the scans and an accurate 3D terrain mesh was created of each site and integrated with the conventional survey data. Vitruvius also made the point cloud of each site accessible to the client through the Leica Jetstream free viewer. 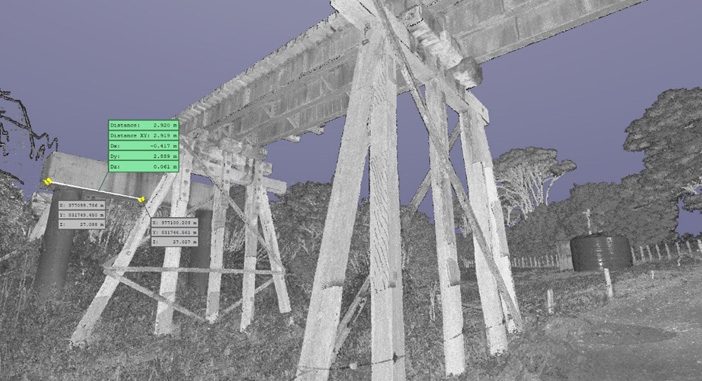 Not only did this allow the client to see each tunnel and bridge as a fully interactive 3D model, it was also used as a visualisation tool by engineers and designers. The ability to view the structures in 3D is a valuable tool that minimises the need for future physically site visits, saving on costs, delays and safety issues.

From the resulting 3D models, Vitruvius’ own expert rail design team were able to determine the design changes necessary for 6 of the tunnels in order to accommodate the requirements of modern rolling stock.

Despite the complexity of the project, the Vitruvius team completed field surveys on all 19 sites within the time frame and whilst the NAL remained a live operating line with daily freight moving through uninterrupted.

The survey team were able achieve this due to the many benefits of utilising Leica laser scanning technology and their efficient workflows, providing the client a fully interactive digital deliverable that can be carried through for the remainder of the project.