Ian told us he chose this set up after a lot of research. He had quite a range of machinery but was looking for an excavator that could cope with the variety of work they do, everything from general earthworks to roading and trenching. And he reckons he’s found the perfect combination with JCB and engcon.

“Our team is often working in confined spaces so the engcon tiltrotator really appealed to me,” says Ian. “I can tilt the bucket to 45 degrees and spin it 360 degrees. It gets into just about every nook and cranny on the job and all from one machine position, which saves us heaps of time.”

Recently, Ian’s JCB Hydradig has been working on SH1 widening the road between Warkworth and Wellsford. With a sheer vertical rock face on one side and a busy highway on the other, the working area was very limited for space.

Ian explains that the engcon’s flexibility was useful on this job, as he didn’t need to keep repositioning the machine; he could just stay in one place and let the tiltrotator do all the work. Less machine movement saved a fair amount of time and hassle on a job where multiple machines were working alongside each other. 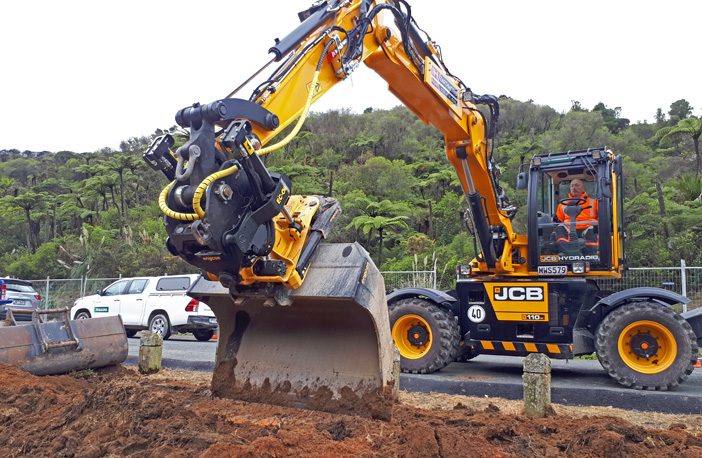 “I did plenty of research into tiltrotators and the engcon really stood out from the rest,” says Ian. “Their reviews were extremely positive and the ability to quickly drop the tiltrotator off and work with a normal hitch was a major selling point for me, and the fact they are supplied locally was definitely a factor.”

Tiltrotators are becoming more and more popular in New Zealand, especially where there’s a need for one machine to be able to take on multiple types of work or operate efficiently in confined spaces.

IH Earthwork’s engcon tiltrotator was the first to be sold in New Zealand by Global Survey who recently became New Zealand dealers for the Swedish brand, adding to their existing Leica Geosystems business.

Ian reckons his JCB and engcon set-up is pretty special, but the new controls took a bit of getting used to. He chose to replace the original JCB joysticks with an engcon joystick steering system, resulting in one controller for both excavator movements and tiltrotator operation.

“We are looking forward to setting up engcon’s EC oil system, which will enable us to quickly change hydraulic attachments without getting out of the cab and changing hoses and hydraulic couplers.”

Originally from the UK where JCB and engcon are well established, Ian was confident of the benefits of a wheeled excavator over tracks and the engcon brand over other tiltrotators.
Ian says that the appeal of wheeled excavators over tracks is being able to drive on the road between locations without organising or paying for transport, particularly handy when you’re working on roading or sub-division projects where you may need to move back and forth several times a week.

“Without a doubt controlling the steering and movement of the JCB with the engcon joysticks was a no-brainer. Now we’re up and running with this set-up, it’s a joy to operate—very smooth and so much faster.”

A Unique Set Up

Interestingly, the JCB Hydradig, supplied by Clark Equipment, is different from most wheeled excavators since the engine and hydraulic pump are housed in the lower half of the machine rather than in the top half. This results in a much lower centre of gravity making the machine more stable and the absence of a big bonnet obscuring the operator’s view makes for good visibility.

Ian says that at the end of the day it’s all about efficiency. You invest in a particular set-up for a reason; it has to add to your business and make you more productive.

This article originally appeared in Deals On Wheels Magazine Sept 2020 and is reproduced here with permission.

Find out more about engcon tiltrotators here or contact our specialist team: