How is the New Leica Nova MS60 MultiStation Different?

You Are Here: Home → Surveying & GIS News → How is the New Leica Nova MS60 MultiStation Different?

In simple terms, the new Leica Nova MS60 MultiStation is a new class of instrument, based on a Total Station but with the power to “do it all”.

When Leica Geosystems introduced the world’s first MultiStation in 2013, the MS50, they introduced the term “mergeTEC” to represent the merging of technologies. This term still fits well, a MultiStation represents the merging of the technology of an advanced robotic total station with scanning capabilities, with imaging from two cameras and GNSS through SmartPole and SmartStation solutions.

In terms of capabilities, a MultiStation is a measurement instrument that is able to be fully utilised each and every day due to its capability to take on virtually any measurement task and give you the power to make the right decisions regarding what to measure and how.

Topographic survey, staking roads, railways and tunnels, monitoring, scanning – a true MultiStation can do it all.

How is the New Leica MS60 Different?

The new Leica Nova MS60 MultiStation has the same product name as its predecessor, it even looks the same as the previous version and still runs Leica Captivate onboard, but it is different in a number of important ways.

Firstly it delivers increased versatility, not only in terms of the situations when it can be used, but also in the way it can be used. For example: with more intelligence built into the scanning it is now able to quickly scan thin horizontal bands to easily create floor plans, or to pause a scan, complete other tasks and then return to finish the scan already in progress.

For instance in situations where you are trying to measure an area and an obstacle is encountered (e.g. when a car or truck suddenly parks up in your way). Instead of having to just wait for this to be moved, you can stop the scan, do other tasks and then finish the scan later, once the obstacle has moved.

The new Leica MS60 is significantly faster, the instrument can scan at up to 30,000 points per second, with the clear benefit of allowing you to collect more data in less time. For example: a full dome scan with 30mm spacing at 10m can now take under 15 mins, instead of over 40 mins.

This instrument is also incredibly fast when used as a robotic instrument: it can track highly dynamic targets even at close range, it learns the environment around you (“self-learning”) it stays locked to the right prism even in challenging environments.

The faster scanning speed has been achieved through the combination of improved electronics, software, and algorithms. Together these deliver a faster rotating speed of up to 360° per second, enabling greater scan rates of up to 30,000 Hz, and a spiral scan pattern as an alternative to the existing Vertical Scan Pattern.

The improvements include a Band Scan Area method. This method allows a horizontal band around the MS60 to be defined as the scan area. Utilising the new spiral-scan pattern, means these band scans are completed incredibly quickly, for example a 1° tall, 360° wide horizontal band with a density of 10mm at 10m can now be measured in under a minute.

This is ideal when trying to create floor plans [e.g. lease area] or measure inside an object, such as a tank. 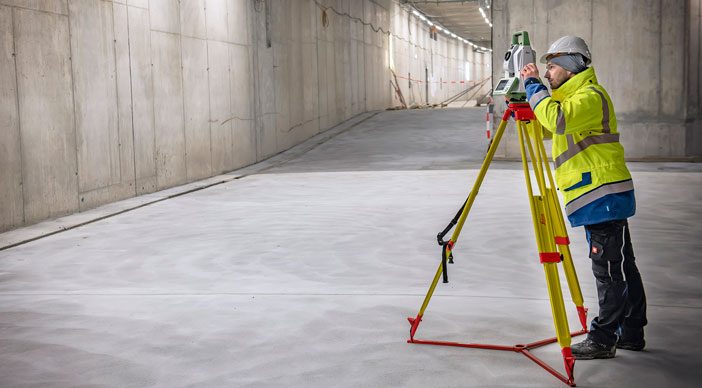 Additionally, the Surveyor can save time by defining the definition and parameters just once, then re-using that definition in each room.

For example, if you need to compare changes in an object on a regular basis, for example in a construction environment where concrete is sprayed daily. Here you could use the same setup location and scan definition to easily check the thickness of a layer immediately after it has been applied.

The results can be viewed onboard the instrument with Leica Captivate software, enabling decision making in the field, with no need to transfer data back to the office.

The Convenience of Dynamic Lock

Should the prism lock get lost, the powerful Dynamic Lock feature allows fast and user-free relocking.

Prior to Dynamic Lock, the Leica MS60 would take a few seconds to detect and lock onto a moving prism but only when the prism passes into the telescope’s field of view which is quite narrow at only 1.5°. This may seem like a short delay in the process, but over the duration of a days work these delays build up.

With the Dynamic Lock feature, there is no need to wait for the Leica MS60 to lock on to the prism. The field of view has been increased to a wider range of +/-20° and is now in the form of a vertical laser fan, which automatically detects and locks onto any target that crosses it. It is also able to detect and lock onto targets even when they are moving.

Remove the Risk of Errors with Auto Height

When It Has To Be Right

The improved scanning speed, accuracy, range, and features of the new Leica MS60 have made it more versatile and suitable for a wider range of applications such as tunnelling, roading, building construction, surveying and mapping.

The new Leica Nova MS60 Multistation is the ultimate all-rounder and brings sensor fusion to the next level by combining: highest-end total station capabilities, 3D laser scanning, GNSS connectivity and digital imaging to help you perform all required surveying tasks with just one instrument.