Safely ahead of the game with cutting-edge technology 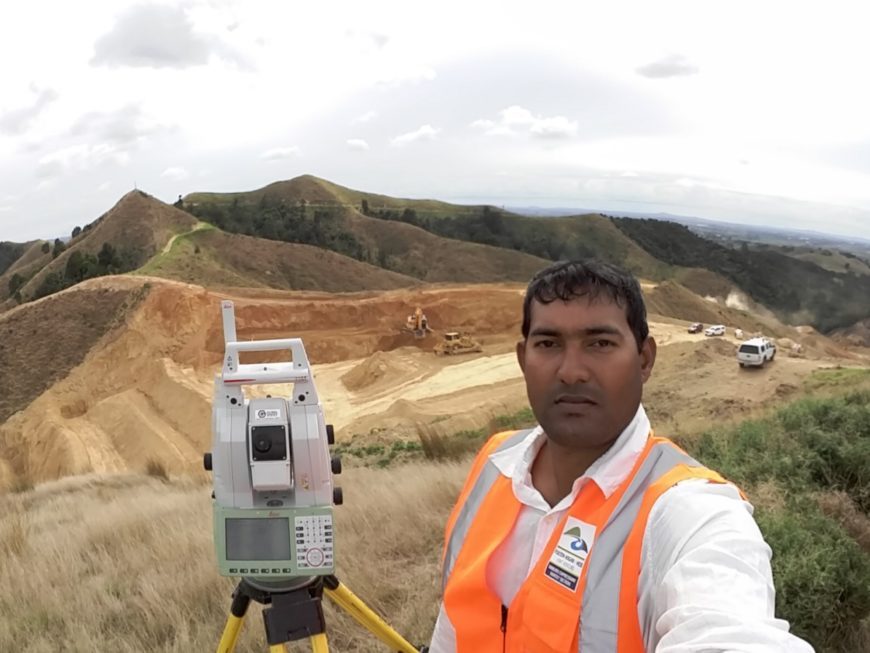 The Waikato Expressway is a significant new four-lane highway being built on the North Island of New Zealand. When completed, it will be a vital strategic connection for the Waikato region, linking the busy urban centre of Auckland to the rapidly growing Bay of Plenty region.

This massive construction project has been designated by New Zealand as one of the Seven Roads of National Significance (RoNS), a program which invests in the future growth and safety of New Zealand. When finished, the four-lane expressway will not only improve travel time and contribute to the region’s economic growth, more importantly, the thoroughfare will improve the safety of driving, significantly reducing serious accidents, traffic congestion and noise.

Overcoming construction obstacles while looking after of Mother Nature

This complex and massive Waikato Expressway has been split into seven different sections of construction built by various contractors all to be completed by early 2020. New Zealand’s Transport Agency chose the Fulton Hogan HEB alliance for the 15.2 kilometre stretch, known as the Huntly section having previously worked together on other construction projects, such as the recently opened Tauranga Eastern Link in the Bay of Plenty region.

The estimated $458 million NZ dollar construction Huntly section, which commenced in October 2015, will entail building nine bridges, of which four will transport traffic over local roads, four over existing streams and one over a railway line.

There are 36 major culverts, or underground tunnels, ranging in length from 13 to 130 metres. These allow rivers with fish and other aquatic life to pass through. The Fulton Hogan HEB alliance takes special care to preserve the wildlife in and around these streams as many are on the endangered species list.

Certainly the most challenging aspect of the Huntly road section is its diverse terrain. The road is being built on a mixture of wetlands to steep terrain, and soils types include silts, clays and greywacke sandstone. Bulk earthworks for this section involve moving more than 3 million cubic metres of material. One million cubic metres of rock needs to be removed from the Taupiri Pass and requires controlled blasting for the final 10 percent of the road’s construction.

A full array of solutions
Global Survey has become the preferred supplier to the Fulton Hogan HEB alliance and many of its solutions can be found on site, such as the new Leica MS60 MultiStation with Leica Captivate software. Many Leica TS16 robotic total stations, CS20 controllers, GS10 / GS15 antennae plus base stations and rovers are also in use by the survey team onsite.

Global Survey has also rolled out a large fleet of Leica Geosystems Machine Control systems on excavators, graders and dozers which are being used on-site.    The machine control systems allow the operator to visualise the design in 3D and then the automated machines will control the blade precisely to design.  Feedback from the operators and foreman onsite to the use of the systems has been very positive allowing the JV to meet the tight construction tolerances required by the project and get significant gains in productivity whilst saving in survey and set out costs.

“Utilising the very latest Leica Geosystems survey technology, we have been able to create a high level of safety and increase productivity. Surveyors no longer need to work in dangerous trenches or around large heavy machinery in operation,” said Ed Kelly, survey manager for the Waikato Expressway Huntly Section at Fulton Hogan HEB alliance.

Safety is not always in numbers on construction sites

Due to the size and complexities of working on this site, safety was a large concern for the Fulton Hogan HEB alliance. Cutting through steep slopes, blasting away rock and using heavy machinery to move the 3.5 million cubes of earth could have been a very dangerous endeavour with so many surveyors and construction workers walking around onsite.

The safety risks associated with having survey field crews working around plant and machinery and on steep terrain are well understood by the JV.  In addition to the clear productivity advantages of using the Leica MS 60 Multistation, with its unique scanning capability, many of the potentially higher risk survey tasks have been able to be carried out using the Leica MS60 MultiStation with its precise scanning technology.  “With pegs quite often being run over by machines, we have to recheck their positions. If surveyors are back in the office, it means waiting an hour for them to get to the construction site, which means a lot of downtime,” said Kelly, “Now we don’t have to wait to start moving earth. The MultiStation is great for production and for safety. And, after the initial surveying, the machine control systems take over so there’s less people onsite.”

Scanning with a MultiStation is new to the Fulton Hogan HEB alliance, and the firm is very pleased with the results. Fulton Hogan has used the MultiStation 3D scanner to create a wide range of scans with exceptional accuracy and results.

During the Huntly project, Fulton Hogan HEB alliance have applied the MultiStation for day to day construction tasks. However, in the future they would like to use the Leica MS60 to its full advantage, by creating point clouds with overlaid measured points for realistic 3D models of the terrain before construction actually starts. Offsite and onsite work could be improved dramatically by adding visual control of actual construction. Scans of the construction could be done to confirm that construction is in accordance with the design during and after the construction is completed.

On a project such as Huntly, with its hilly and steep terrain, the Leica MS60 is put into use often. The MS60 increases productivity and makes applications such as volume calculations more accurate and faster. The MS60 MultiStation is the very latest cutting-edge technology and allows the alliance to demonstrate market leadership in technology.

Machine Control – great for production and for safety

Leica Geosystems 3D Machine Control Systems, such as Leica iCON grade and excavate are also used for safety and dramatically increase productivity and accuracy. Crews no longer have to move around large machines to stake out pegs.

Using Leica 3D Machine Control means less downtime and more productivity on site. Machine operators and construction crews no longer needed to wait for surveyors for setout stakes and to check and recheck before working. Digital project plans are easily loaded into the Leica iCON systems  in industry standard data formats like DXF / DWG and LandXML which decrease the office software investment costs and streamlines getting data onto the machines quickly and efficiently which is a significant benefit when managing changing designs  Systems on the machines are all set up with Leica Telematics which allows for 2-way data transfer to and from the machines and remote support through any web browser without the need for special software.

“We choose Leica Geosystems not only because of its quality, but also the backup and support we receive from Global Survey and the fact that we could also bypass software we didn’t need. We transfer data directly out of AutoCAD (Civil 3D) to the machines. It saved us a lot of time and a lot of difficulties,” said Kelly. Another advantage of using Leica Geosystems products is its application software. Survey hardware is often replaced every five years because of technical advances. Leica Geosystems is constantly improving its application software and frequently distributes updates which are made based on direct customer feedback

Targeted to be completed by approximately the end of 2019, Fulton Hogan HEB alliance is ahead of schedule, in part due to the leading technology being used onsite from Leica Geosystems.