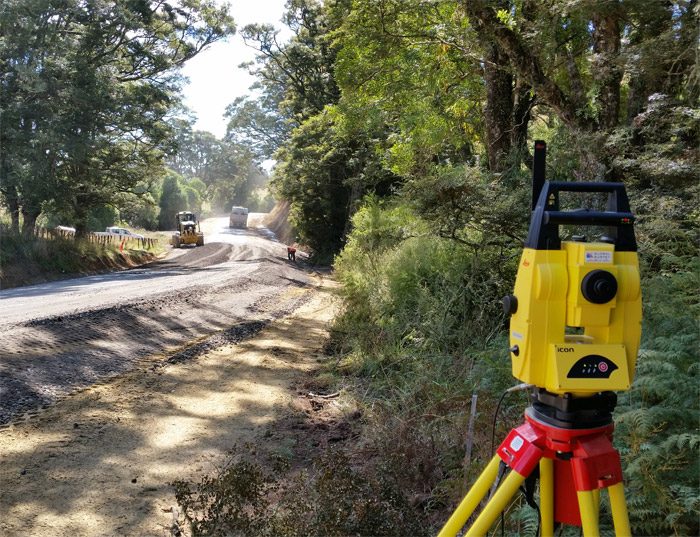 In October, Jilesen Contractors Ltd were appointed as preferred roading contractors to Ruapehu District Council, which is responsible for maintaining and preserving 6,733 sq.km of the central North Island including 850km of metal roads. They need to complete seven kms of sealed pavement rehabilitations before season’s end, as well as grading and shaping a number of metal roads. All works have “really tight tolerances” says Managing Director Tony Jilesen, and the volume of work that Council expects to be completed this season has meant there is little leeway for site or weather delays.

The company has already completed the 1.8 km Ruatiti Road job at Orautoha near Raetihi, have been working on the 2 km Whangaehu Valley Road rehabilitation since early February, have begun the Ohakune Mountain Road upgrade, and will begin the Ohura Road rehabilitation shortly, says Jilesen’s Roading Manager Mason Slako.

The Whangaehu Valley Road is part of the 77km OTT cycle trail from Ohakune to Taihape. Luckily, Jilesen knew a road cycling event was coming through “their” section while they were working on it. “It took most of the day,” acknowledged Mason. “The cyclists were coming through between about 10am and 3pm and because they were crossing unbound, granulated pavement we spent that day simply making sure it stayed as smooth and damp for them as possible.”

Given the speed at which they need to work, the requirement to keep traffic moving throughout, and the well-known challenges of forming and maintaining pavements across a wide range of soil types and temperature/precipitation extremes, this is no small undertaking. To ensure all work is carefully coordinated and controlled, they need technology that is contractor-friendly yet delivers to the highest tolerances.

The company has just taken possession of a Leica iCON Grade 3D system with a Leica iCON Robot50 total station from Global Survey, which integrates with their CAT M-series grader. Mason says it is this that has allowed them to cope accurately and quickly with the huge workload.

Jilesen’s had the option of equipping their new Leica iCON Grade 3D system with either a GNSS receiver or Robotic total station. They chose Leica robotics because of the superior accuracy to meet the demands and expectations of their clients.

“While this system is being used specifically on road grading, it could be used for any number of things,” he says. “But at the moment it allows us to control the grader, calculate the correct material volumes and because it’s completely automated, we could potentially work 24-hour shifts since we don’t need pegs or stringlines, or surveyors on site.”

Global Survey Managing Director Ray Copeland believes the time has finally come for 3D machine control in the Construction industry. Most Machinery manufacturers already include an electronic interface wired to the machines’ hydraulics. The Leica iCON system uses this interface to control the machine’s computer; there is no need to install hydraulic valves with their system.

“With Councils and the NZTA demanding tighter tolerances and smoother roads that remain safer for longer, the challenge has been to deliver that economically,” Ray says.

Pavements perform best when the surface has fewer bumps. Achieving this cost-effectively is helped considerably by modern electronic instrumentation, and workers are becoming comfortable with information technology using smartphones, tablet PCs, and mobile internet services to manage data in the field.

Hailed as “stringless construction” when this technology was introduced in the late 1990s robotic total stations, 3D laser scanners and GPS surveying equipment have changed construction processes as well as surveying techniques.

GNSS Systems and Robotic total stations automatically track the antenna or prism mounted on a machine or surveyor’s pole. They are now the industry workhorses because of their accuracy, range, and versatility for any positioning task. Companies can load plans into them via USB, cellphone or the cloud, and manage construction changes the same way.

A 3D control system like the Leica iCON starts with a control panel which interfaces with the machine. This computer has the 3D control software already loaded with a number of project design files, and can be swapped between machines and jobs. The computer communicates directly with the total stations, lasers, or GPS instruments to determine the machine’s position, meaning it always knows where the machine is on site. The cut and fill information is then relayed to the machine guide or control the machine to design.

Depending on the technology used and machine type, accuracies of a few millimetres are achievable.

This level of accuracy also means base course and pavement quantities can be calculated precisely, decreasing product wastage and increasing costing accuracy.

Owning three quarries ensures base course supply is never a problem for Jilesen’s, though, especially when the quarry purchase came with all operating consents and certificates – and two trucks.

Managing Director Tony Jilesen says, “We make a conscious effort to keep our gear in top working condition, and as modern and practical as we can afford.” Their fleet currently includes 28 machines including mobile crushers, and eight trucks. They employ a total of 35 staff including management.

The Jilesen family are well known in the King Country. Tony and Christine Jilesen raised three boys and with their help broke in land around Waimiha using a D47U Caterpillar dozer. Sons Martien and Tony Jr then worked for some time with John McJarrow in Wellington, which gave them extensive experience operating and understanding a wide range of earthmoving machinery.

In 1989 Martien and Tony Jr formed Jilesen Contractors Ltd sited on Tony’s land in Ongarue. The company rapidly grew too big for this so relocated to the former Shell station in Taumarunui, where they are still based.